“We in the press are about to over-politicize his visit to America,” writes New York Times columnist David Brooks.

How right he is.

The media are awash with bland, secular generalizations. The trumpets of left and right are already at blaring with either praise or denunciations of the Pope’s message.

House Speaker John Boehner’s invitation to Pope Francis to address Congress “will be at his own party’s expense,” declares Brian Beutler in the increasingly hardline liberal journal “New Republic.”

In a scathing article, curmudgeon conservative George Will blasts The Pope for “his woolly sentiments that have the intellectual tone of fortune cookies.” 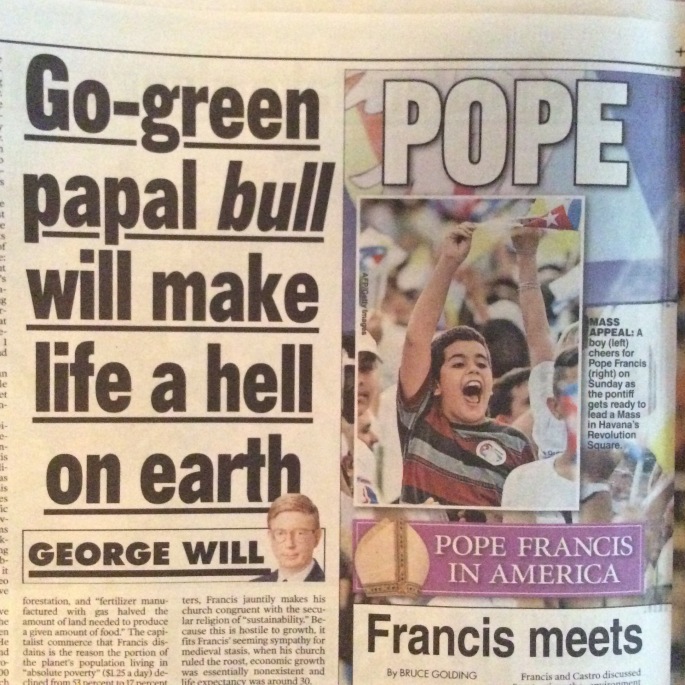 But comments from both sides that seek to put the Pope in a box miss this importance of his message and above all, his example.

American Catholics don’t fit neatly into frames tethered to snippets extracted from a hugely complex spiritual leader,” writes conservative Catholic Ashley McGuire. As “a capitalism-loving, pro-life advocate who is quite possibly obsessed with abortion, I could not be more excited to welcome Pope Francis to America.

Regardless of political affiliation, many Americans appreciate the Pope’s emphasis on love and mercy over dogma and orthodoxy.

He is humble and a warm presence in world of snarky pundits and fiercely opinionated politicians. As a Jesuit, Francis takes his vow of poverty seriously. He believes we can learn from the poor. His heart is with those who suffer and are in need.

As a devout Catholic he understands how symbols send a message. After arriving at Andrews Air Force Base and being greeted by President Obama and Vice President Biden, the Pope hopped into a small Fiat instead of the usual large limo reserved for dignatories.

He says the church should be “bruised, hurting and dirty because it has been out in the streets,” instead of being unhealthy “from clinging to is own security.

As Gerald Seib points out in The Wall Street Journal, this Pope is a disrupter: “in sync with the dissatisfaction with the status quo” and also recognizing that The Catholic Church establishment has lost its way.

Many of us like leaders who would shake things up. Think Donald Trump or Bernie Sanders. This Pope challenges the existing order. An overwhelming majority of American Catholics approves of what he’s doing.

“I don’t think the categories Left and Right are very useful for understanding the Pope,” says theologian and papal expert Lawrence Cunningham of Notre Dame.

On some social matters he is deeply conservative. “Francis unflinchingly maintains the church’s ancient teaching about the sanctity of human life and total opposition to abortion,” writes Timothy Carney in a highly perceptive piece in The Washington Examiner.

“Although he has urged Catholics to drop their “obsession” with such issues, Francis would also stand with his predecessors against gay marriage. In fact, he clashed with the Argentinian government when it was expanding marriage to include same-sex couples.”

“On economics, Francis would look more like a Democrat than like a Republican, but so would his “conservative” predecessors,” writes Carney.

On the environment he has been more outspoken than those who came before him. But with rising carbon levels in the atmosphere and a growing sense among global leaders that action is required, the need is greater than it was years ago.

Fact is, whether  we’re conservative, liberal or independent, most of us like the guy.

“Pope Francis is an extraordinary learner, listener and self-doubter,” says David Brooks. “The best part of this week will be watching him relate to people, how he listens deeply and learns from them, how he sees them both in their great sinfulness but also with endless mercy and self-emptying love.”

2 thoughts on “Don’t Put His Views In a Political Box.  What The Media Are Missing About Pope Francis.”