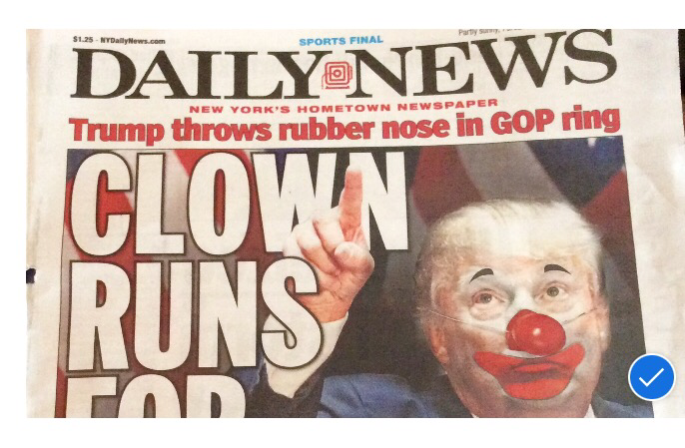 Sure, it’s easy to make fun of Donald Trump.  The front-page of the New York Daily News portrayed him as a clown.

The mocking mainstream media had a field day after Trump announced that he was running for President. The speech was “like it was plagiarized from an old drunk man mumbling to himself in a bar,” wrote Chicago Tribune columnist, Red Huppke.

The Daily Show’s Jon Stewart sounded positively gleeful about the Trump event saying “it was over a half-hour of the most beautifully ridiculous jibber-jabber ever to pour forth from the mouth of a billionaire.”

How hilarious.  It’s easy to sit back and have a good laugh at those we despise.

But there’s a dark side to the thrill of political hating.  It contributes to a nasty climate of cynicism, distrust and even despair.

“Whether or not we want to admit it, political hate is a demand-driven phenomenon.  We are the ones creating a big market for it.”

This week Donald Trump is the most searched Presidential candidate on Google.

Do your own calculation.  For every newspaper article, radio or TV story about a new idea or a constructive way to think about a political problem, there must be a hundred examples of ridicule, sensation or mockery.

What the heck are we doing to our public square?

I agree with Arthur Brooks.  You can fight back.  Whatever your own view of the world, “avoid indulging in snarky, contemptuous dismissals of Americans on the other side.”

7 thoughts on “Mocking Donald Trump: Fun For Some, But It’s Bad For America”