OK this is it.  Final thoughts on my trip to England.

The blue rooster on the old grey rectangular plinth once reserved for a statue of a long-dead member of Britain’s ruling class near Nelson’s Column, is an example of how many here would like to think of themselves.  Fun, a little bit excentric, but very much in touch with their roots and proud traditions.

Irony, wit and a love for language are delightful ingredients of English conversation. In newspaper columns and on the BBC there is often a pleasing irreverence that is missing from our more earnest commentariat. 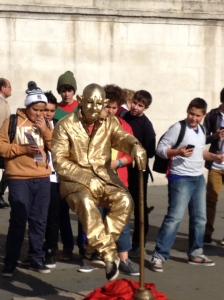 Street performer in front of The National Gallery, London

From West End theater and the enormous London Eye, to street performers dressed in gold relaxing on invisible chairs in front of gasping crowds, there is much to amuse tourists.

All very fine as far as it goes.

But scratch beneath the jolly surface and you will often find service not with a smile, but through gritted teeth. The impossibly rude hotel manager Basil Fawlty still lurks somewhere in the English soul.

While this may sound strange coming from a guy lives in New York, many English people do have a problem with sincere good manners.

When New Yorkers say “thank you”, we usually mean it.  Not here. There’s often a shocking insincerity on display, especially from the comfortable classes.

One of many examples I witnessed in the past few days was in the foyer of a modern London office building.

“Oh, you are so extremely kind,” said a posh chap with an apparent straight face to the uniformed security guard, as he was allowed through metal turnstiles despite failing to present his corporate ID.

Did the man with tailored suit and silk tie mean what he said? Not a chance.

The owners of the country bed-and-breakfast where I stayed last weekend threw a late-night party for a bunch of loud friends right below my bedroom.  There was no hint of apology the next morning.

Cell-phone conversations on commuter trains are often long and loud here. And while that often happens on Metro-North, the English pride themselves in being proper and polite in a way that few Americans would claim to be.

Did any of these minor wrinkles spoil my trip? No way.

I still love it here. But a little more warmth and spontaneous kindness would not go amiss.

What’s your view of the English? I’d love to hear it.